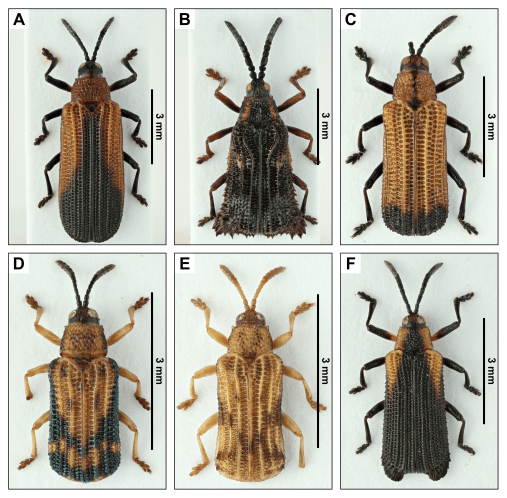 Checklist of the leaf beetles (Coleoptera: Chrysomelidae) from El Salvador

Leaf beetles are a diverse and economic significant group. Many species from this family are pest species on crops. Identification is challenging and the knowledge about distribution of leaf beetles is limited in many areas, especially the tropics. Logistic and administrative challenges in many countries make it difficult to organise a sampling campaign. Historic collections from museums are a valuable starting point to assess species diversity in a certain region.

BINCO discovered a big collection of leaf beetles from El Salvador in the Royal Belgian Institute of Natural Sciences (RBINS) in Brussels. This collection was originally from Jan Bechyné, a known scientists who did much research on this family of beetles. Bechyné lived from 1920-1973 and after getting his PhD in 1948, he worked in several institutes including the natural history museum of Prague, the museum G. Frey and the RBINS. In 1959, he went to Central and South America with his wife Bohumila, where he worked and lived in El Salvador and eventually settled in Venezuela. Together with his wife, he wrote 188 publications on leaf beetles which are still very relevant.  The collection of Bechyné in the RBINS consists of 18 well filled insect boxes and was digitised by BINCO during June – September 2017. In total, 2.797 specimens belonging to 89 species were present. The information extracted from this collection together with data from literature was compiled in a checklist of leaf beetles from El Salvador.

At this moment, 420 species of leaf beetles (Chrysomelidae) are recorded from El Salvador. This project added 33 species to the list. This study will serve as a baseline for further research in the area of Central-American leaf beetles.

The results of our study were published in the scientific journal ZooKeys and can be found here. 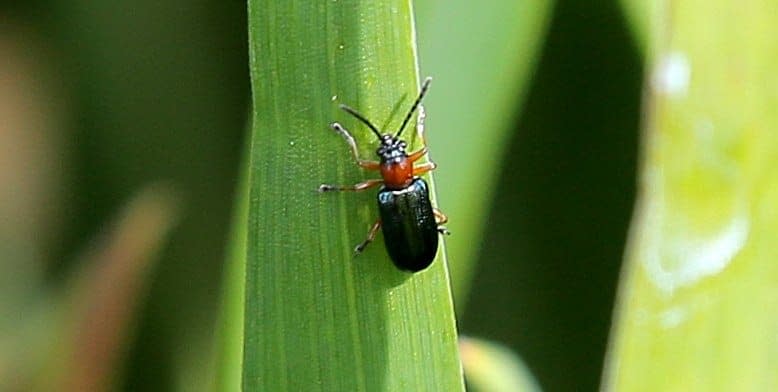 Distribution and identification of cereal leaf beetles in Flanders

Cereal leaf beetles, a genus of leaf beetles (Coleoptera: Chrysomelidae – Oulema spp.) are known pest species of cereals in the Northern hemisphere. Due to very small differences in morphology, accurate identification of the species within this genus is still a challenge. Moreover, since these species exhibit a different phenology and thus the date of control practices is dependent on the dominant species, it is important to know what species make up most of the population. By this, more selective control strategies can be developed in the future without using too much pesticides.

BINCO collaborated with a study on the distribution and species diversity of cereal leaf beetles in Flanders. The species diversity was monitored in several cereal fields during three executive years. We found three species of Oulema which were frequently present; O. melanopus, O. duftschmidi and O. obscura. By the use of discriminant analysis, we found that these species can be identified quite reliably by body shape (like length and width of elytra), but checking the identifications by use of genital structures is still advisable.

Population densities were very variable within and between years, which could hamper selective control strategies. This would require an adequately big and spatially and temporally spread sampling campaign.

The results of this project were published in the scientific journal Environmental Entomology and can be found here.

Photo: Hilde Christiaens, this project was funded by VLAIO-LA 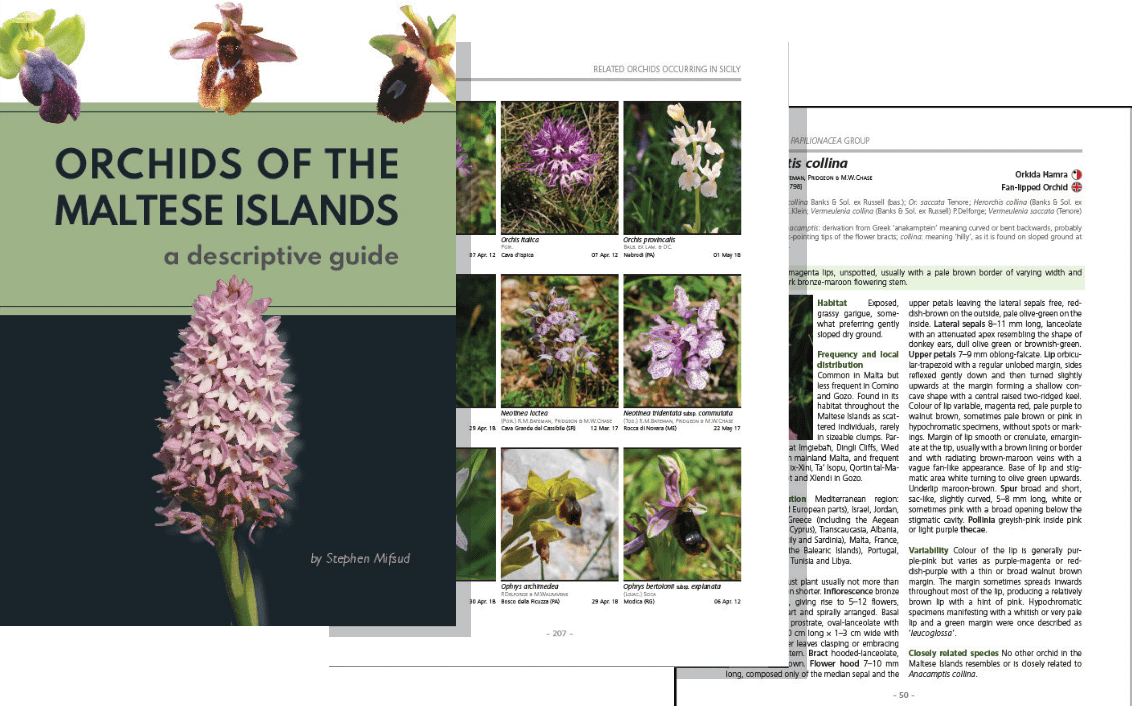 Book: Orchids of the Maltese Islands - a descriptive guide

Since 2016, BINCO and Greenhouse Malta NGO initiated the Malta Biodiversity Initiative (MABIMO). MABIMO strives towards a biodiversity monitoring network for biodiversity across the Maltese islands with standardised survey protocols. This network will help to gather the necessary information to assess what species are present, how they are distributed and detect possible trends in time and space to better conserve the respective taxa and ecosystems.

MABIMO is initiated with a select number of taxonomic groups including orchids. BINCO and Greenhouse mobilize volunteers through citizen science projects to collect information on orchid data to gain insight in their current distribution across the islands and help construct and update the red list of threatened species for Malta.

The book ‘Orchids of the Maltese Islands - a descriptive guide’, written by Stephen Mifsud in collaboration with Greenhouse Malta and BINCO, is a product from this citizen science project and can be considered a valuable addition to the current knowledge on Maltese orchids. The field guide covers all species of orchids known to occur on the Maltese Islands. Besides detailed morphological descriptions and identification keys illustrated with diagnostic photographs, the species pages in the book contain information on their distribution, rarity, morphological variation, flowering period, pollinators and so on.

“Orchids of the Maltese Islands” is a must have guide for nature enthusiast and professionals alike for anybody living in or visiting the Maltese islands.

The book is available online at NHBS and BDL amongst others.

During the second half of 2014, we studied the effect of the intensification of natural forest for coffee production on large mammal communities using camera traps in Ethiopia. Now the results are out and published in the conservation journal Oryx (see below).

The high demand for coffee internationally results in an ongoing intensification of natural forests by clearing understory and removing trees resulting in few undisturbed forest left in Ethiopia. Although overall species diversity remained constant, large and medium sized carnivores are the first to disappear and diurnal activity patterns are shifted to nocturnal. The increased accessibility of coffee forests decreases the diurnal activity of large mammals and specifically affects the top predators in the ecosystem.

This is the first study in Africa that studied large mammals in coffee forest. Although Ethiopia is known for its high number of both animal and plant species that do not live anywhere else in the world, there is a concerning lack of conservation activities to preserve the biodiversity locally. Moreover, the extent of agricultural land is rapidly increasing at the expense of natural forest, resulting in a significant loss in biodiversity. Coffee forest, however, has since long been proposed as a more sustainable agricultural system, conserving biodiversity while providing income for local communities. We found a mammal diversity in coffee forest comparable to that of mature natural forest. This study therefore indicates the importance of coffee forest in Ethiopia for mammal conservation, where coffee has been cultivated as a shade crop for more than 1,000 years.

The complete loss of natural forest in combination with increased human disturbances may result in the local extinction of top predators such as leopard, which can subsequently trigger negative effects on other forest components such as decreased forest restoration due to higher pressure of herbivores. Therefore, a balanced landscape mosaic of coffee and natural forest may be a valuable conservation option, contributing to local economy while safeguarding the diversity of large mammals.

We compiled a video showcasing a handful of the inhabitants of the study area.


If you would like to read more about this study, the paper ‘From natural forest to coffee agroforest: implications for large mammal communities in the Ethiopian highlands’ is now freely available until 31/12/2018 in Oryx—The International Journal of Conservation. The study was funded by the Rufford Foundation and Idea Wild. 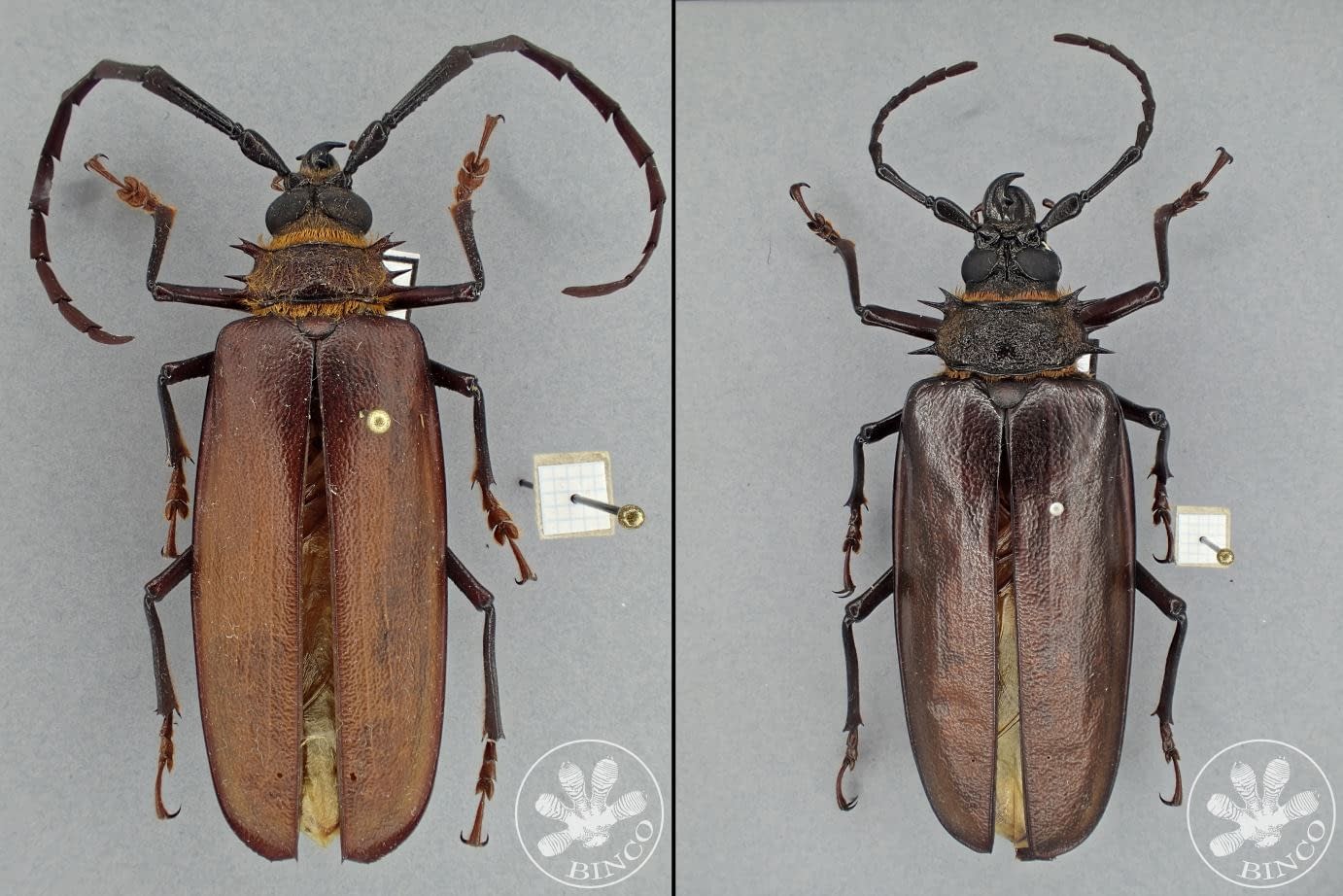 This charismatic new species of longhorn (Derobrachus cusucoensis) from montane forest in Cusuco National Park adds to the biological valorisation of the area. A small isolated mountain, part of the Merendon mountain range, Cusuco National Park is a cloud forest park characterised by a high endemism. As in many other places in Honduras, deforestation is a serious threat. The newly described large beetle is a frequent visitor of the light trap surveys as part of the yearly repeated biodiversity monitoring by Operation Wallacea in collaboration with BINCO. BINCO specializes in the documentation of smaller and less studied taxonomic groups to complement local conservation efforts and help protect these unique ecosystems. The species is described in the scientific journal Zootaxa and can be retrieved here. 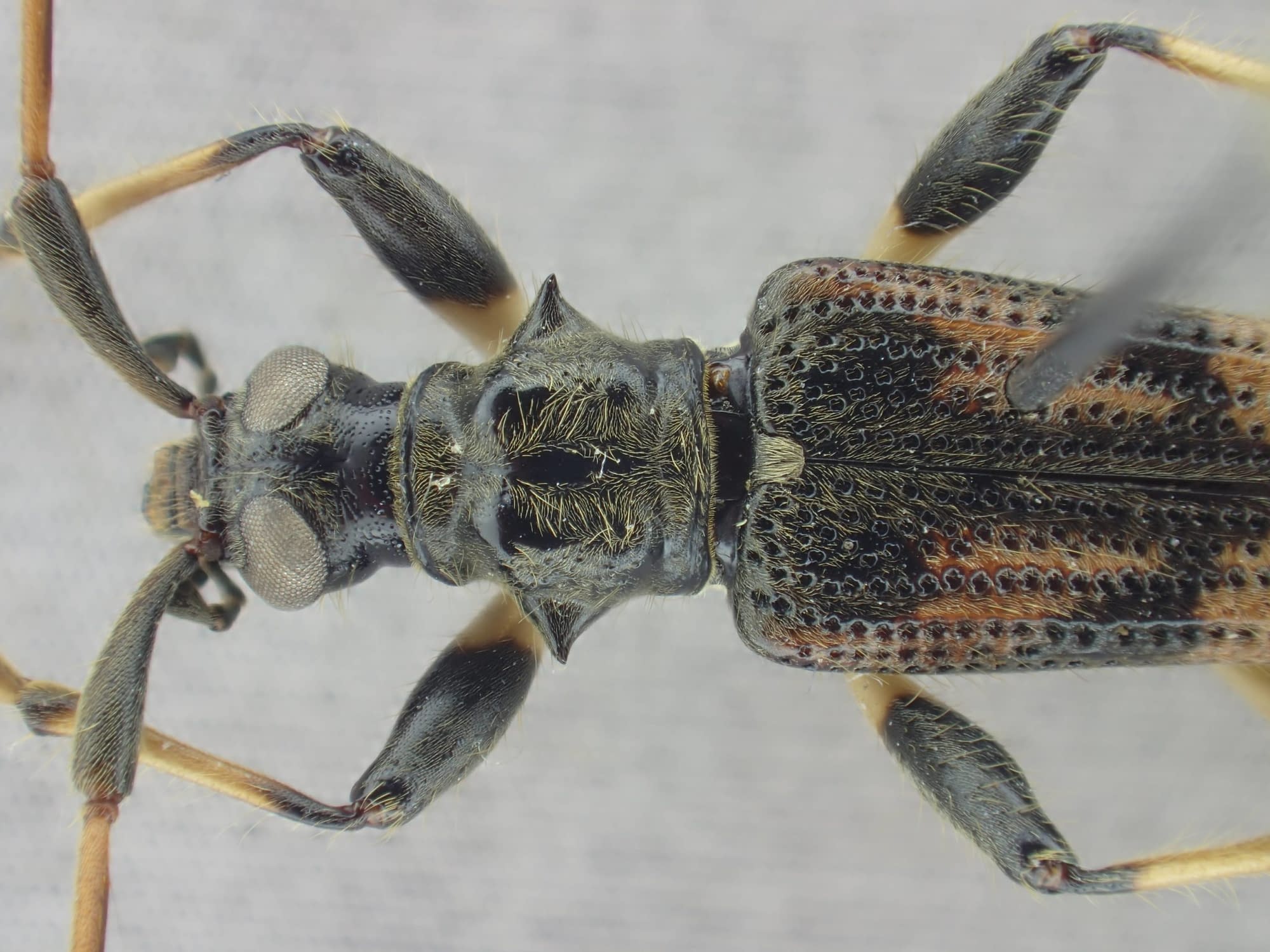 In the scope of a digitization project at the Royal Belgian Institute of Natural Sciences, we developed a new method to facilitate digitization of museum specimens. The new method had to be relatively cheap and fast. These requirements were met by use of a compact camera with focus stacking functionality which allows the camera to take multiple images at different focus depths. Afterwards, these sets of images are combined to form one picture in which the entire specimen is in focus. The development of cheap and fast methods is important because most museums face a shortage of personnel and infrastructure to keep up with digitizing their ever-growing collections. Our method is currently being used in project Chrysomel’ID with the valuable help of several volunteers.

The results of our research have been published in the open access journal ZooKeys. The pdf file can be found on our publication page. 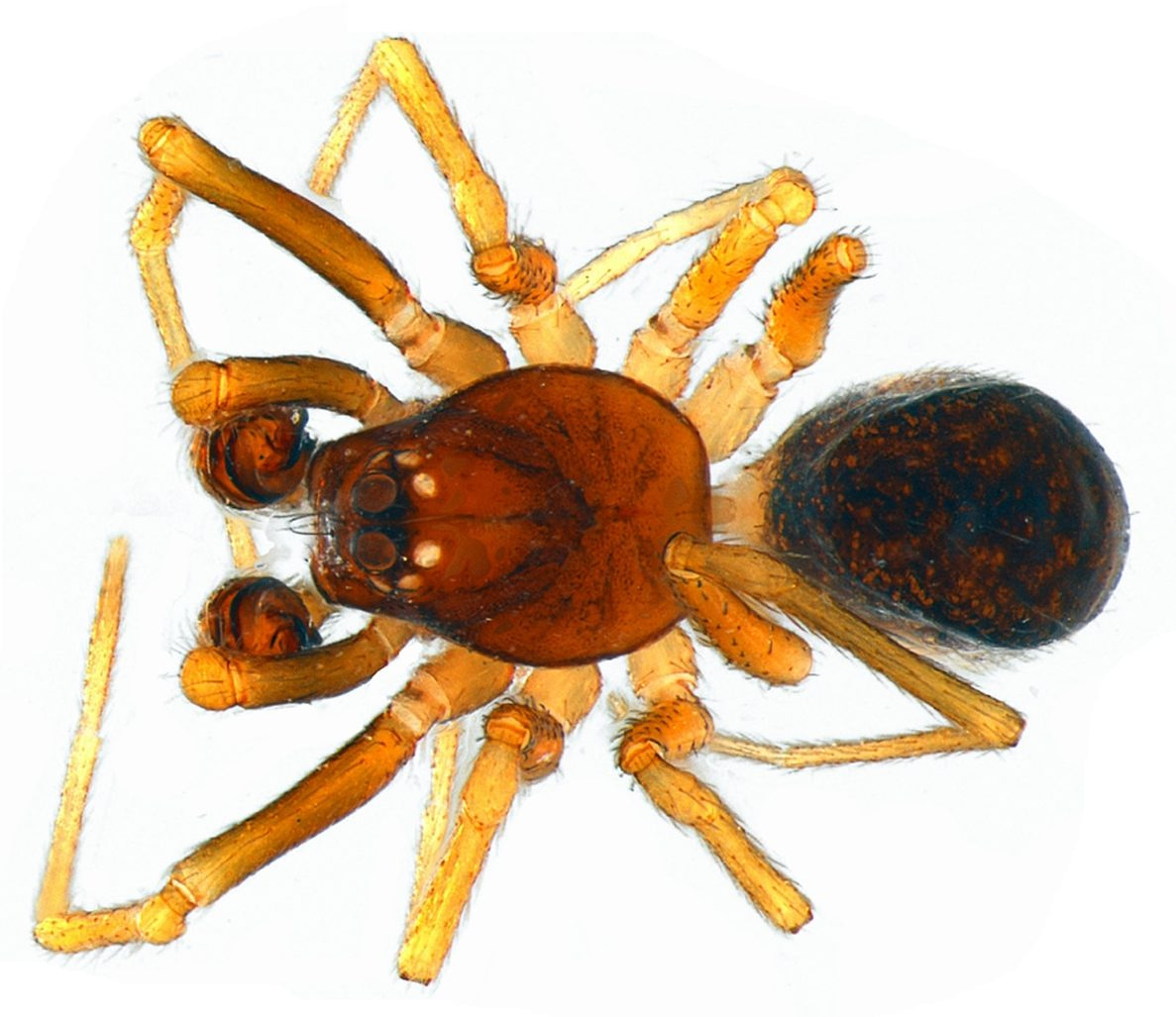 Two spiders new to science were discovered and described by BINCO members under the supervision of African spider specialist Rudy Jocque. Koen Vanderhaegen discovered Dusmadiores elgonensis in coffee forests on Mount Elgon (Uganda) in 2015 during fieldwork for his PhD. The species was named after the study site where it was discovered and the description was published in the scientific peer-reviewed journal Zootaxa. A spectacular white wolf spider was discovered by Merlijn Jocque in 2012, and collected by Siel Wellens in 2016 in northwestern Madagascar in collaboration with Operation Wallacea. The spider was found on a few white sand beaches of inland lakes, surrounded by dry forest. The species was named Ocyale ghost, referring to its white habitus and a wink to the large white direwolf in Game of thrones. The description appeared in the European journal of Taxonomy.

Continuously growing in members, collaborators and projects since 2008 we are proud to present the brand new BINCO website! Please have a look at our ongoing projects worldwide, freely available information provided in the form of BINCO reports, peer reviewed publications and the many new species described. We are always looking for new collaborations, don’t hesitate to contact us with any questions. And why we do this…? Because every species matters!