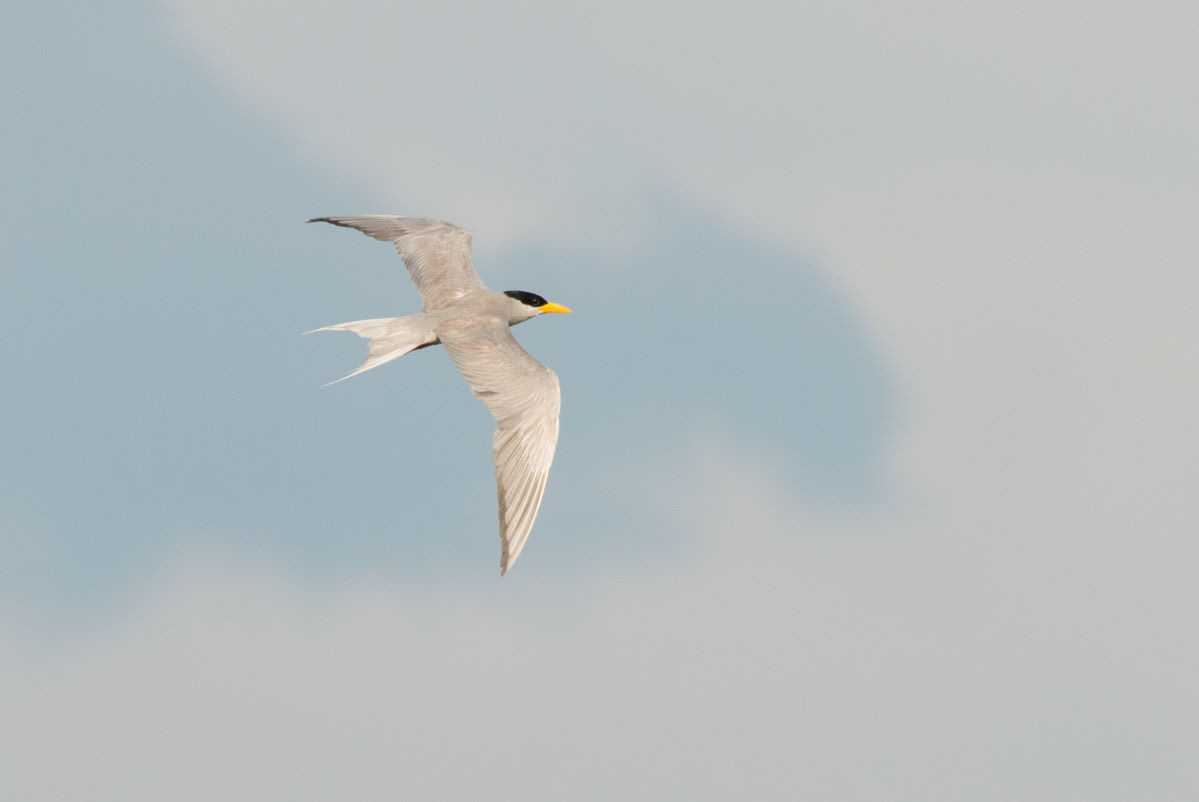 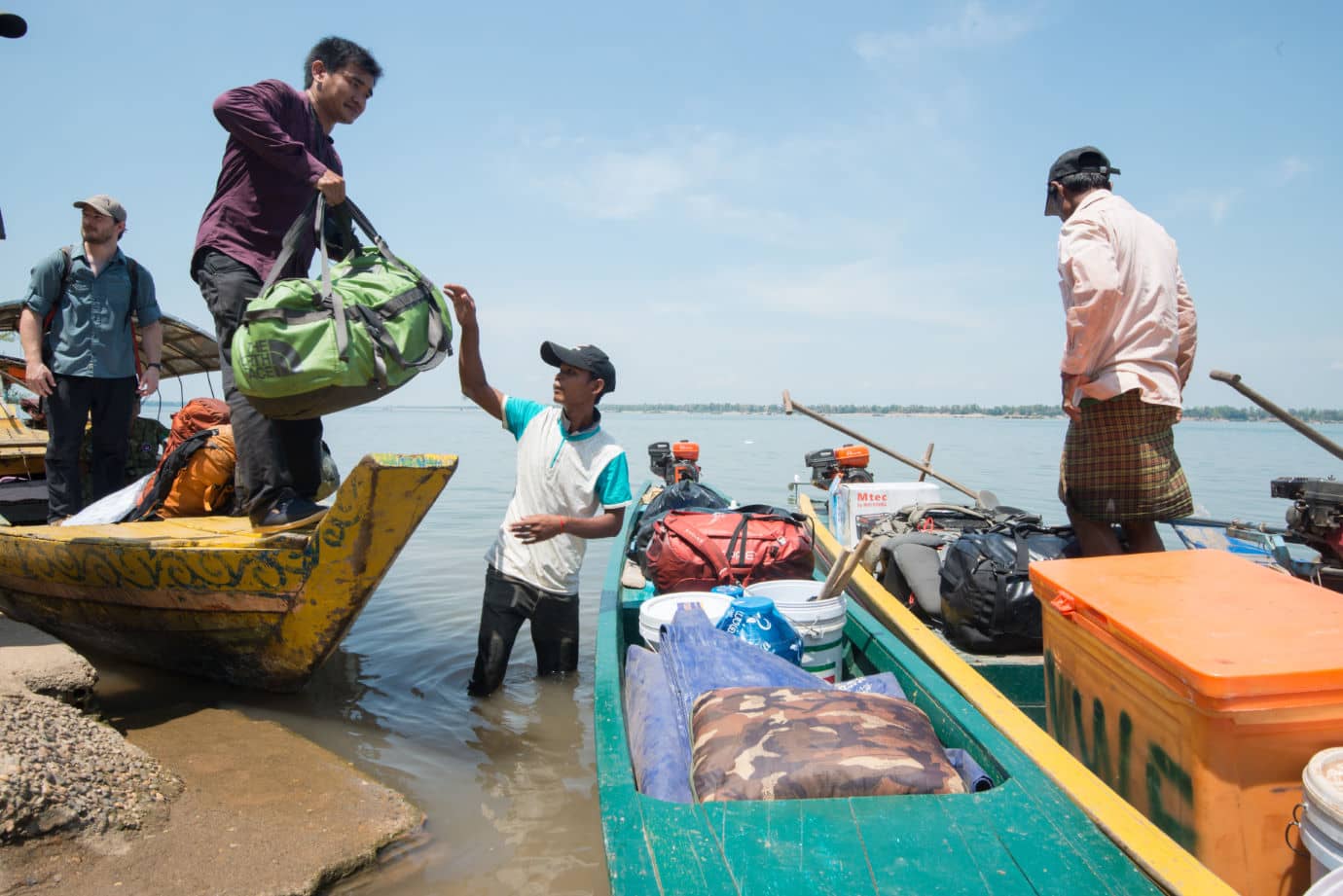 |In International Projects
|By Jan Mertens

In May 2018, together with an interdisciplinary team of biologists put together by BINCO, we did a rapid biodiversity assessment along the central section of the Mekong River in Cambodia. The goal for John Mittermeier and I, the ornithologists of the team, was to determine the avian diversity in the study area, which had been proposed by WWF as a protected area for the critically endangered Hog Deer (Axis porcinus). Luckily for us, a previous survey of the area had been done in 2008 by Robert Timmins who had surveyed birds along the river near our study site over the course of several weeks. This work set the groundwork for us to compare how things might have changed over the last decade. Our findings from this expedition were recently published in BirdingASIA (volume 32: 80-89). Here we share some additional details about our findings and a brief behind the scenes of the expedition. For more detailed information, feel free to get in touch for a copy of the published article.

After a few days of preparations and logistics in Phnom Penh our group set out to Kracheh (also spelled Kratie), located on the central section of the Mekong River. The plan was to establish four base camps over the next three weeks, all not far from the river, focusing on four distinct types of habitat. These were: sandy riverine islands, wet grassland, dry Dipterocarp forest, and semi-evergreen forest. One of our primary goals was to establish the presence and relative abundance of species of conservation concern. Of particular interest in this area are the endangered ibises and vultures.

Motoring into the Mekong we reached the islands where we were to set up camp for the next three days. From Timmins’ survey we knew White-shouldered Ibis (Pseudibis davisoni) was possible here and our boat driver assured us they were seen sporadically in some big trees in the river. Over the next days we covered the innumerable branches of the river separating the small islands in search of them, spotting a group of 7 on one day, and 5 another. A good sign to at least confirm their continued presence in the area. Of note was also finding the fourth record of Green-backed Flycatcher (Ficedula elisae) for Cambodia in the dense forest of one of the islands.

However, we also got our first glimpse of the direct threats that birds are facing along the Mekong at this first site. Exploring one of the islands we stumbled upon a couple of boys digging into a sandbank. Approaching them, they proudly showed us their bounty; eggs and nestlings of Blue-tailed Bee-eaters (Merops philippinus), apparently a local delicacy.

Our second camp was located just west of the river, in an area with wet grasslands and patches of dipterocarp woodland, where Hog Deer had been sighted some time back. In regard to birdlife, the area looks quite disturbed. So, we weren’t expecting much when we happened upon a skulking Acrocephalus warbler in the long grasses. After a challenging photo-op, John managed to take some half-decent pictures, confirming the ID as a White-browed (Manchurian) Reed Warbler (Acrocephalus tangorum). In total we saw at least four individuals in the area. Classified as Vulnerable, with only one known wintering area around Tonle Sap (much further west) in Cambodia, this record, close to the second camp, comprises a new wintering ground for the species.

The third camp was located on a large river island about 40km north of our previous camps. The habitat was mostly semi-evergreen forest, with good quality dry dipterocarp forest a short boat ride away on the other side of the river. The local WWF team had been running a ‘vulture restaurant’ in this dipterocarp forest for some years, in hopes of aiding the diminishing populations of Red-headed (Sarcogyps calvus), White-rumped (Gyps bengalensis) and Slender-billed Vultures (Gyps tenuirostris). These species are all Critically Endangered, so we were keenly interested in assessing their continued presence since Timmins’ survey in 2008. The team arranged for a cow to be set out in a clearing about a week before we arrived, and a local man, employed by WWF, kept close tabs on the carcass in case any vultures arrived. None came. We later learned that it had been many months since any had been seen, despite their efforts in placing a fresh carcass out every month. Although this doesn’t necessarily mean they are completely gone, it does paint a very worrying picture for these species.

While at this camp we also made a couple boat trips up the Mekong to a river island with breeding River Terns (Sterna aurantia), a species that is now highly threatened in Southeast Asia, where two tern nests were being monitored by a local couple employed by WWF and WCS. Unfortunately, predation by rats is a real problem on these small islands and one of the tern nests failed shortly after our visit. But not all was doom and gloom, as on one of the visits we recorded a couple greenshanks on a sandbank. Upon later inspection we were able to identify one of them as a Spotted (Nordmann’s) Greenshank (Tringa guttifer) – the first record for interior Cambodia. This finding provides evidence that the Mekong could be an important north-south corridor for this migratory species.

Now starting the third week of the expedition, we established our last camp in semi-evergreen forest in an area protected by the local village west of our last camp. Before even arriving at the spot we were struck by the widespread clearing of the forest in the area. Not far from the camp, commercial loggers were bulldozing roads into the forest. Perhaps one of the most haunting memories of the trip comes from these forests, when John and I spotted a pair of Great Hornbills (Buceros bicornis) displaying in a large tree. We were awe-struck by these majestic birds, rolling their heads back and making their guttural calls, but our heart sank hearing chainsaws roaring nearby.

After three weeks of surveying we were able to record 219 species in these four habitats, more than a third of the total species known from Cambodia. Among these were four globally threatened and eleven near threatened bird species. Worryingly, we did not find several species of waterbirds that had been recorded by Timmins in 2008 and we never saw any of the threatened vultures despite the feeding efforts of local conservationists. This suggests continued population declines of several of these birds along the Mekong. But heart-lifting news came after the expedition when the Cambodian government announced that the areas we had surveyed will be established as two new protected areas. More recently, more reassuring announcements were made including the government scrapping plans to build damn on the Mekong, close to the Laos border. These developments provide a glimmer of hope that the species recorded during the expedition will continue to persist in this area, and that those absent may one day return.